A story of activating JPW Mini Monitors with VMA2016 amplifier

A while a go my youngest one accidentaly hit his door room so hard that one of the 7 JPW Mini Monitors of the livingroom home theatre fell down and broke.Plastic tweeter supports broke down and the outer case took some hit also. Tweeter of Mini Monitor was hanging inside the case on the wires. So now I had spare time so together with my daughter we opened the box and took away speaker connectors, tweeter and bass element, also one L coil, C capasitor and R resistor + some acustic foam.We glued back together the tweeter support, although I broke it down 3 more times as the plastic was so hard and fragile.

Previously I had already bought for this project an D-Class amplifier VMA2016 from dx. The specs of VMA2016 are quite good. This was recommended for me by more experienced friend (tnx Petri) to be good to look out. It turned out to be fabulous. 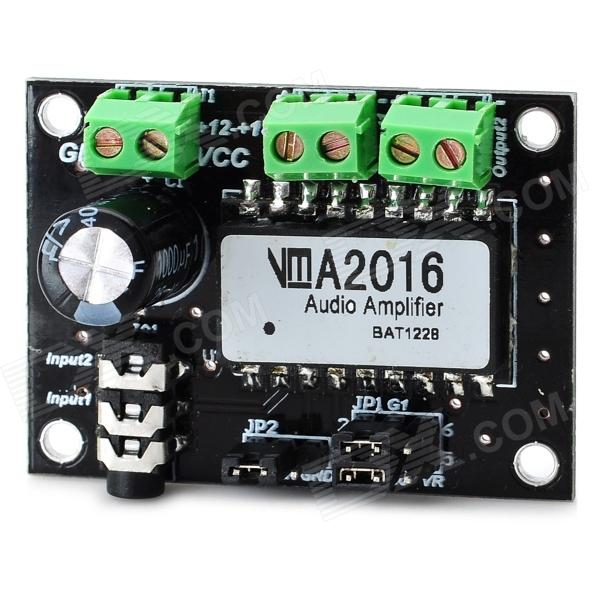 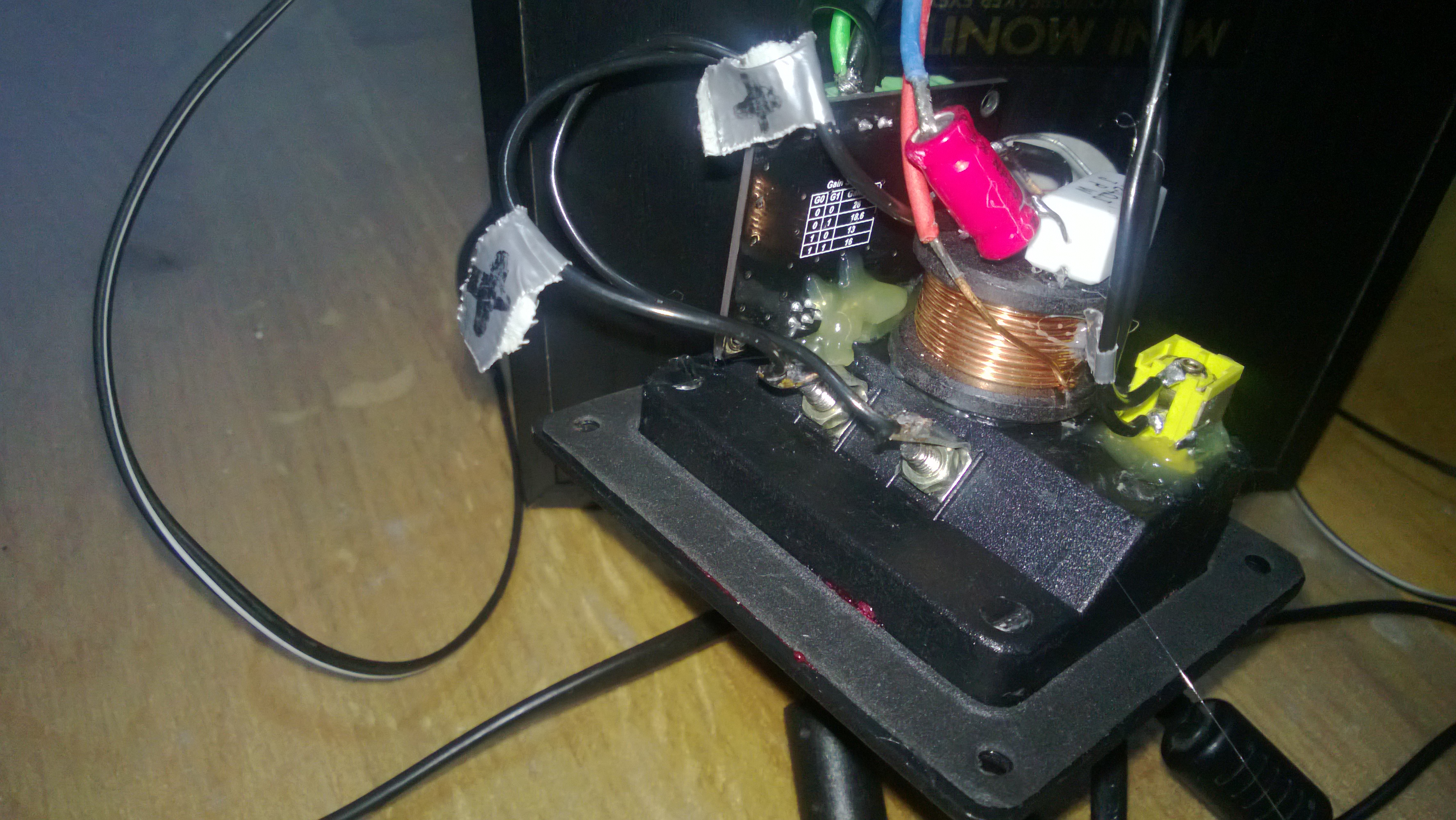 Then from the start I aldready had an Idea of building up everything inside the speaker except the power source. So I also soldered and old IBM thinkpad 16V connector to feed the power in.

I did the design so that everything is connected to that plastic plate on the back of speaker, because If I ever broke down the amplifier or the speakers, It will be way easier to repair and change. I drilled 2 abt. 6mm holes for the 3.5mm stereoplug and for the power connector. I had to drill that big for the line in also as I noticed that otherwise it might be so that I can’t push the 3.5mm plug long enough to have proper stereo connection on it.

Then I used hotglue pistol for attaching the circuit board + the power connector. I tried to seal them as good as possible, but the line in terminal you actually cant seal air tight because of the structure and the mechanical work of the connector.

Then with minor testing before assembling JPW Mini Monitors back everything sounded fine. Then I put some stickers to warn not to connect the active speaker to amplifier as the only things how you notice that is the extra power + line in connectors + the stickers. You can feed wide range of power, I have heard that 8.5V works, but it can take as much as 24V also in. I have an plan to use this also on picnics, just by attaching some 18650 LiPO batteries (3 to 5 cells) with welcro on back of the speaker. 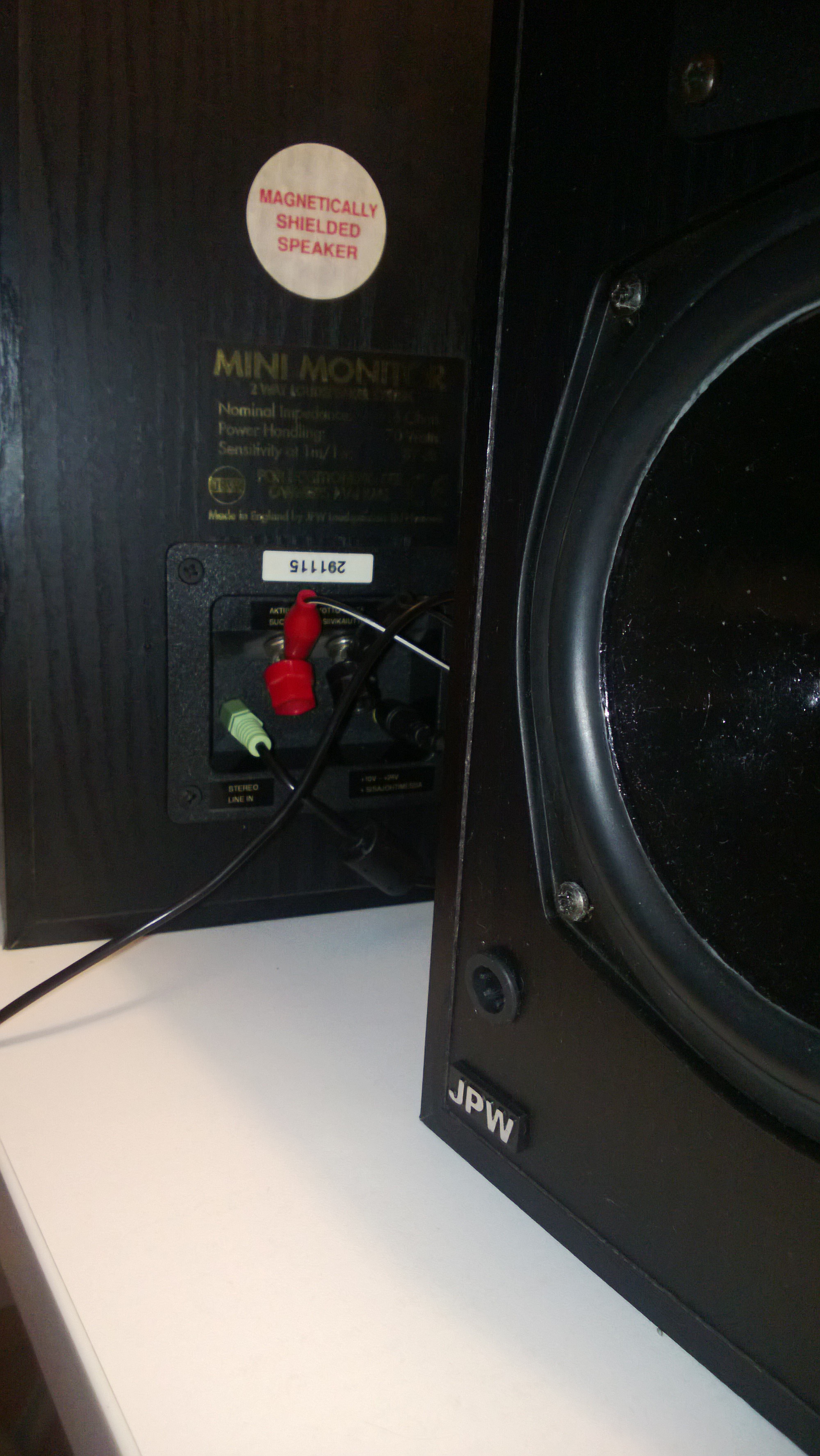 My new Active JPW Mini Monitor speakers work really well and all you need is the 16V Thinkpad powersupply or equivalent with that small yellow connector, 3.5mm to 3.5mm cable for audio in. If you want stereo, you need regular speaker cables + passive JPW Mini monitor speaker to connect the passive one to active one.

For the “carry around” option I will do some additions later on to have it easier to carry around.

Then some quick sound and video samples in youtube, the sound is distorting because of the phone microphone but they sound actually way better on live. Really happy on the outcome how my new Active JPW Mini Monitor came out. 🙂